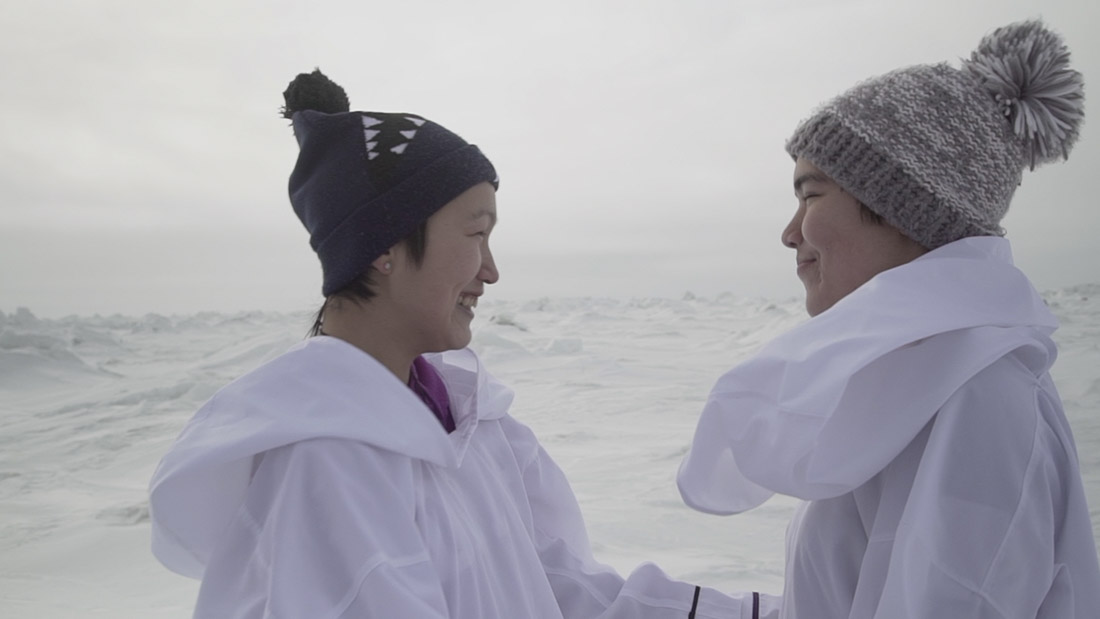 Throat Singing in Kangirsuk directed by Eva Kaukai and Manon Chamberland Eva and Manon practice the Inuk art of throat singing in their small village of Kangirsuk. Their mesmerizing voices

Throat Singing in Kangirsuk directed by Eva Kaukai and Manon Chamberland
Eva and Manon practice the Inuk art of throat singing in their small village of Kangirsuk. Their mesmerizing voices carry through the four seasons of their Arctic land.
Sweetheart Dancers directed by Ben-Alex Dupris
Sean and Adrian are a Two-Spirit couple determined to rewrite the rules of Native American culture through their participation in the ”Sweetheart Dance” held at powwows across the country.
Fast Horse directed by Alexandra Lazarowich
To compete in the Indian relay against the best riders in the Blackfoot Confederacy at the Calgary Stampede, Siksika horseman Allison RedCrow struggles to build a team with second-hand horses and a new jockey, Cody BigTobacco.
Running Shadow directed by Carlos Rafael Betancourt
A young Lakota woman dreams of running competitively outside the Reservation, but with broken shoes and no real track to practice on, her chances seem slim. Even with the best shoes, she’s haunted by the guilt that she couldn’t run fast enough to save her sister from suicide. Those traumatic memories stop her from running fast enough on any track. When her coach father surprises her with a chance to compete off the Rez, her fears become unbearable. Only by revisiting her trauma and standing up to her father can she find the strength to run on her own terms.
Wajak: At the End of the Lake directed by Peter Poucachiche, Kobe Wawatie
On a Sunday morning, Peter Poucachiche wakes his grandson up at dawn to go moose hunting. Inuk Hunter directed by George Annanack A poetic and contemplative film about an Inuk man hunting for northern lights with his camera.
Fainting Spells directed by Sky Hopinka
Told through recollections of youth, learning, lore, and departure, this is an imagined myth for the Xąwįska, or the Indian Pipe Plant – used by the Ho-Chunk to revive those who have fainted. Wearing My Culture directed by Olivia Lya Thomassie Inuit communities take pride in making and wearing their winter apparel. Bonds are created within family, culture, and the environment through the creation of clothing.
Extinct directed by Nicole DiLeo
An animated interpretation of Chief Seattle’s legendary words on ecological responsibility and respect of Native Americans’ land rights. Filmmaker in Attendance.
Reclamation: The Rise at Standing Rock directed by Michele Noble
In 2016 at Standing Rock, North Dakota, the youth of many tribes unite the Native Nations for the first time in 150 years and rise up in spiritual solidarity to oppose the Dakota Access Oil Pipeline. Filmmaker in Attendance.